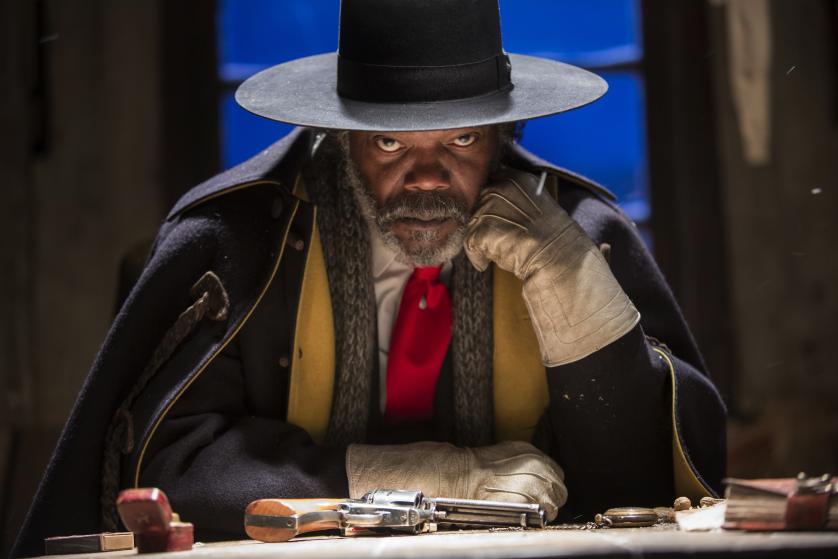 How to Spell Violence

It has often been said that words are magic and grammar is a “grimoire” of rules for casting magical “spells”.

Language powerfully inspires our imagination, perceptions and emotions. In this way, words can literally cast spells in our mind that determine our beliefs, which then control our behavior, often despite our best conscious efforts to resist.

This is well demonstrated in a gruesome scene in The Hateful Eight when Samuel L Jackson’s character vividly narrates a traumatizing story in order to provoke an old man to reach for a gun, so that he can murder him.

Language has the power to instantly create images in our minds, and these images cause the neurochemistry in our brain to start firing as if we were really experiencing these images in real life. This is why pornographic images can be so gripping, as well as the voyeuristic experience of violence, action and romance that is ubiquitous not only in movies, but also in books, comics and magazines.

Words provide us with more than just cues for automatic internal image formation, they also cue up specific emotional feelings and conceptual structures, within which we have a subjective experience of meaning. All of these images, emotions and mental constructs are very difficult to see objectively once we are experiencing them from the inside. In this way, words really do seem to cast “spells” that can take control of our thinking, our feelings and our choices.

This is precisely the case with a very powerful “spell” that has long cursed humanity, one which Samuel L Jackson’s character also specifically employs in order to control the mind of the old “white” man, and “force” him to reach for a gun.

This specific “spell” is using the words “white” and “black” inaccurately as labels of ethnic identity, conjuring up the false impression of a natural antagonism between different ethnic groups, when these words actually have nothing to do with race or ethnicity at all.

We could accurately describe people as being of African or Caucasian heritage, but the words “white” and “black” conjure a “spell” over the mind, providing the illusion that these two groups are inherently adverse, like hot and cold, up and down -and notoriously- good and evil.

This polarization of “black” and “white” people being “good” or “evil” is a textbook fallacy, which is to say, it isn’t true. A fallacy is a flaw in logic, and just like a calculation error in math, the result of using flawed logic is that the conclusions are simply wrong, and any further thinking or actions taken using the conclusions as assumptions will be unhelpful or harmful.

Despite being a blatant polarization fallacy, the “spell” of “white” and “black” people has persisted for centuries, and has conjured up all manner of violence against both “inferior blacks” and “white devils”, though on the whole, this fallacy has been used exponentially more to justify unimaginable violence against “black” people, as well as people who were labeled other colors such as “brown”, “red” and “yellow”.

None of these divisive, color-based labels have anything to do with authentic ethnic identities whatsoever, and instead, create a clear conceptual construct of irreconcilable “otherness” between a wide variety of different ethnicities. The hyper-focus on “black” and “white” in American culture also demands that a vast rainbow of ethnically-unique individuals somehow homogenize and find their identity somewhere along this binary spectrum of “whiteness” and “blackness”.

When we use accurate language, we create a completely different emotional feeling and conceptual structure in our mind, one which also leads to entirely different beliefs and actions.

If we use more accurate ethnic labels, even very broad terms such as African and Caucasian, instead of “white” and “black”, we can sense immediately how they do not automatically convey any sense of fundamental polarity. The words “Caucasian” and “African” clearly do not give us any indication that these distinct ethnic groups must always be inevitably locked in conflict, like hot and cold…or good and evil.

Once a polarization fallacy takes hold, it becomes very difficult to see “the other” as anything but “evil”, because all people naturally want to believe that they are good.

Of course, many may argue logically that the highly polarized yet racially inaccurate language of “black” and “white” is derived from the clear genetic difference in the skin tone of the different ancestries. While that indeed may be the origin, it doesn’t change the fact that these are now incredibly inaccurate labels that are actively divisive and contributing to continued conflict, and so should rightly also be relics of that brutal past in which they were born, instead of being employed by those who are supposedly working for the now commonly-held ideal of peaceful co-existence and equal sharing of power between a diversity of ethnicities.

While “black” and “white” as racial identities may be a polarization fallacy, this insight is not meant to deny the fact that this “spell” has actually been working very well for centuries to fuel divisive beliefs, leading to endless violent conflict, which continues heartbreakingly to the present day.

I offer these insights because I believe that polarization fallacies lie at the heart of a system of institutionalized and unconsciously-conditioned cultural prejudice that needs to be dismantled in order that centuries of ethnic conflict may truly begin to end –and even more pointedly – because this fallacy is a major component of this subtle yet pervasive system that every single one of us has easy access to…because it lives inside of us.

We have all been conditioned to think in terms of “white” and “black” people to such an extent that we may even think about other ethnic Americans such as Native, Latino or Asians in terms of whether they are more “white” or “black”. There is a diverse cornucopia of distinct ethnicities and unique blends of ethnicities in America that are all consumed and homogenized into oblivion by the vast normalization of this polarization fallacy very inaccurately dividing all people along a binary spectrum which has understandably caused many people, especially of mixed ethnicity, to struggle with identity.

Polarization fallacies ultimately only serve to divide people and inspire conflict, all while obliterating the authentic ethnic identity of millions of unique individuals.

I do not call attention to this polarization fallacy to argue that racism isn’t a serious problem, and I would not argue against the notion that “racism” -that is a conscious or unconscious use of polarization fallacy and belief in a natural antagonism between races as if they were fundamentally opposed natural forces- along with global poverty and starvation, are far worse humanitarian emergencies than covid-19. Polarization fallacies usually lead to violent conflict, and what’s really tragic is that the groups in conflict with each other are almost always natural allies that have a much greater common enemy.

I do not offer these insights to distract from justice that needs to be served, abuse of power that needs to be checked, and laws that need to be reformed or created. I offer this as an addition to those critical needs, one that anyone could begin to meet right now, by confronting the fallacies which plague their own mind, and by allowing a new paradigm to arrive, one which allows space for forgiveness and reconciliation to occur and does not subtly demand we be eternally polarized by culture or the color of skin; one which allows us to taste for ourselves the freedom of forgiveness and to dispel the pain of hatred that these fallacies have generated in our own hearts; to be the change we want to see in the world, and be the first to receive the benefits of leading by example.

What would it look like to live inside an America where no one was considered “black”, “white”, “brown” or any other color, but rather “Zulu”, “”Huasa” “Abyssinian” “Gaulic” “Persian” “Semitic” “Mayan”, “Maidu” or whatever actual specific ethnicity or combination of ethnicities that unique individual’s ancestry actually is?

Could simply making changes to use accurate instead of polarizing language actually be one small yet imminently practical and powerfully effective solution to help transform the faulty mental constructs that give rise to racial division, conflict and violence?